On the first day on the tennis court or playing it for long, tennis rules are there for everyone to follow, but what are the basic rules of tennis for anyone who does NOT know anything about the rules?

Eager to find out the essential but must-to-be-followed rules to play the fair tennis game with not sounding like cheating at all OR actually not knowing nothing about the game; that is all we gonna reveal to you to make sure you enter into the court with full of confidence AND prepared to win (or at least give a hard time to the opponent player.)

What rules they are, let’s get to find them out in brief and little details.

What are the basic rules of tennis 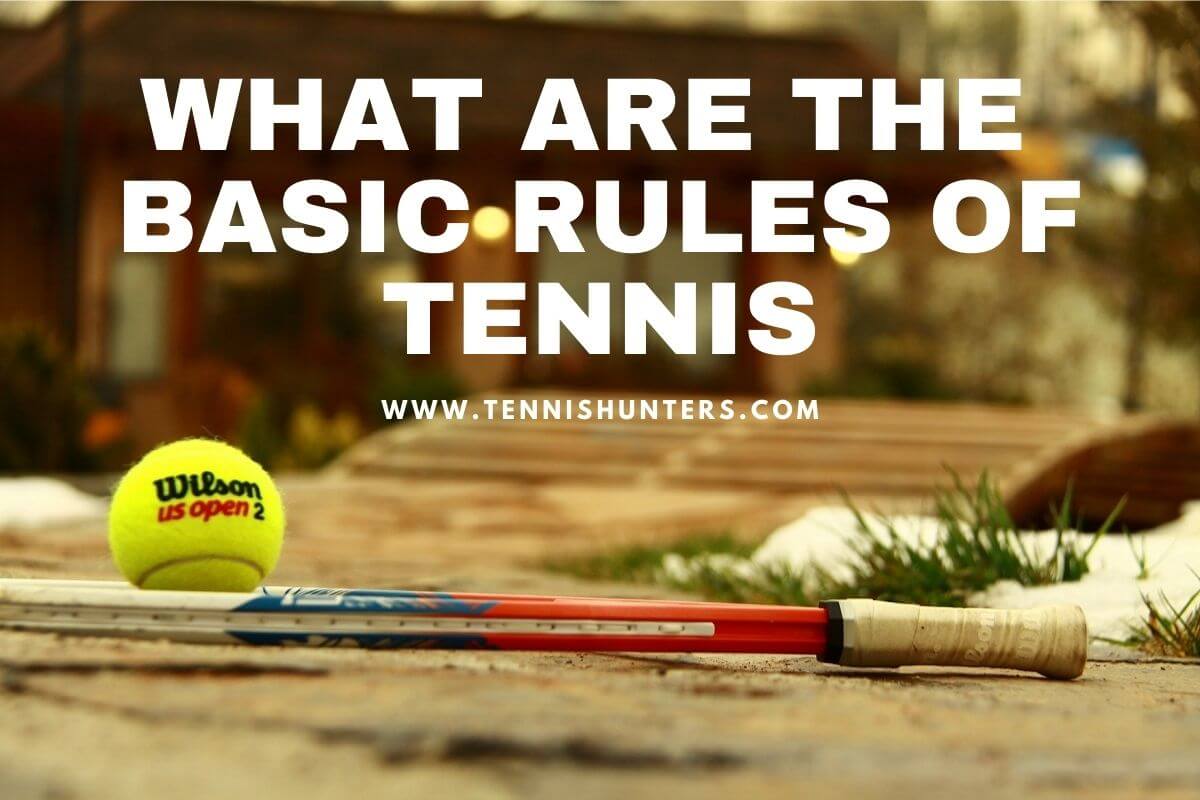 First of all, the tennis rules are significantly different in nature for single and doubles matches.

But that is precisely NOT what they are after. We actually got to cover the general and the basic rules of tennis to play the fair game.

So, take a sneak peek on the overview of tennis rules;

And it starts with the toss or spinning the racquets to decide which tennis player.

Tossing with spinning the racquets is a little tricky for the new player learning to toss. The racket comes with the small alphabet or the shape on the very end of the handle where the opponent would say ‘stop’ actually to have you stop to see who wins the toss.

And the other method is to spin its head and drop to decide who goes first.

But wait as it is not necessarily for the toss winner to go with serving first, but it can land the opponent to pass the turn and take sides.

2- Who serves firstly AND where it should land

Of course, the one who wins the toss. What’s more surprising here? 🙂

Playing the professional matches in the tennis court with facing the opponent that got the name in the game, there is the judges and the associates who keep track of the scores which is always announced first throughout the game,

But when you are playing just with the opponent, you have to learn and keep track of the scores all by yourself.

Generally, the point system in a tennis match goes in the following sequence;

Set over, and the player who wins the 4 points actually wins the set, but to win the game, the players must be having at least a two points’ lead to be called a winner!

In case when both players hit the tied @ 40/40 called ‘Deuce’ where the player must earn up to two consecutive points called ‘Advantage’ point or just plain ‘Point’ to win the whole match.

But when the player who got onto ‘Advantage’ points but loses the point, the score will be degraded down to ‘Deuce’ once again to take the lead also to hit ‘Advantage.’

That is the phase where you would have seen having the professional players exchanging the heated statements to decide if the ball was In or Out.

In the singles game, the balls had to be landed and hit between ‘Back Court,’ ‘Alley Line,’ and ‘Service Court) to score a successful point. Simultaneously, the ball that hits between the ‘SideLine’ and ‘Alley Line’ is basically called the hit out of the court, which makes your opponent earn a point.

Finished completing the first, third, and fight games, that is the time to switch sides with your opponent as it allows the players to change them after every odd game is complete.

Between the sides changing, you are then allowed to take a quick break on the sidelines to prepare for the next game in form.

With the brake, let’s have a grab over a quick drink and wipe yourself off with a towel from the sweat and cool down a bit when it is summery days and heat, giving you a lot of trouble.

During the quick brake, get your tennis bag filled with everything you need so that you converse all the time to cool yourself up rather than looking and asking for the stuff you require.

No way that you are allowed to touch the net in the middle of the game, and why would you?

Touching the net even with your body or the racquet would actually make you lose a point to the opponent, which you cannot really afford to do so.

And that is the reason never to reach close to the tennis net to make a shot as you could accidentally touch the net by chance.

7- Way of hitting the ball

Do not carry the ball on your racket, and the ball should not bounce twice on the racket, or the point is over.

Only once to hit the ball and cannot hit it twice to get past over the net OR the point is over.

Hopefully, you should NOT be asking what are the basic rules of tennis in the future as we have covered some real best, primary, and the necessary limitations of tennis that opens up how you should be playing the tennis game.

Get into playing your first tennis match, knowing all the basic tennis rules to sound like an established one.

Of course, playing the match with knowing all the basic rules is far better than handling the racket in hand and looking at the opponent childishly. 🙂