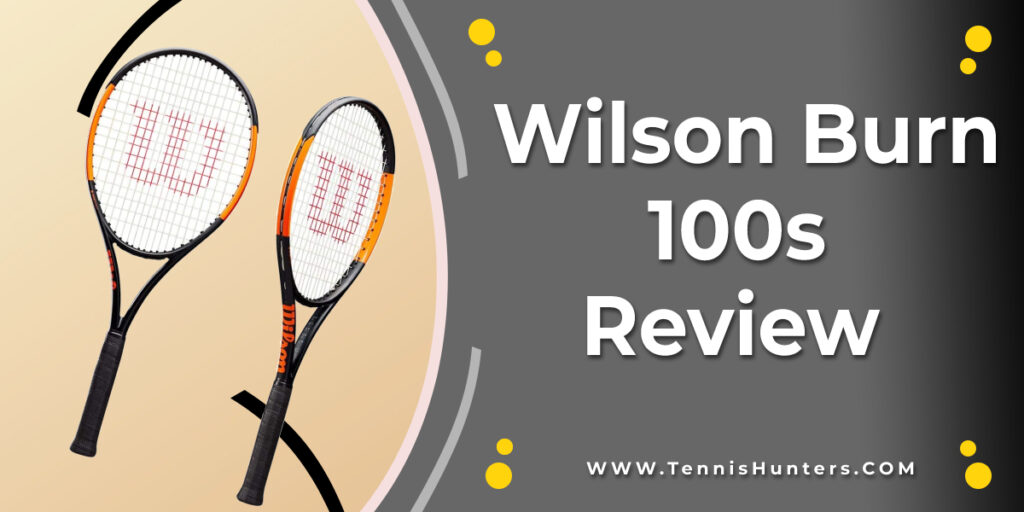 Wilson’s latest line of racquets, the Burns has brought heat in the world of tennis and taken quality up on a whole new level.

The Burn 100S Tennis Racquet is known as the only and by far the best spin-friendly racquet in the Burns line and provides immaculate performance.

The reason why the Wilson Burn 100S review Racquet has gained so much popularity is mainly because of its stellar specs.

It features 18×16 open string pattern, has four headlight points, and weighs around 10.7ounces which not only makes it easier on the hands but also gives the benefit to the player for playing freely.

In the beginning, once we first held it in our hands, we had a feeling that we might not get along but once we started getting the hang of it.

The realization of it being the best tennis racquet on the market hit really hard. It offers a 327 swing weight which means that it offers phenomenal power throughout your game.

We determined the power game of this racquet but analyzing that as soon as the ball hit the net, it was already halfway across the court before we even figured out what was happening, that is the kind of power Wilson Burn 100S offers, one that you won’t get enough of.

Without further ado, let’s dive into all the details of the Wilson Burn 100S Tennis Racquet and figure out if it is worth spending money on or not!

When it comes to making groundstrokes, the 100S Tennis Racquet takes charge and provides the player with great power and ultimate control.

This racquet features Spin Effect Technology which Wilson is most popular for.😃

Their Spin Effect Technology provides a better net clearance while landing inside the baseline without having to change the player’s style of game. This racquet was exclusively manufactured for hard groundstrokes.

The thing that every player praised about this racquet was its stiffness. After hitting a few shots you will realize the amount out of power it offers and the power pack shots it hits.

we have not seen a stuff racquet offer so much power before along with having a large sweet spot to make your shots more accurate.

Another thing that we have tested this racquet for is spin. It offers great spin which is another feature that we rarely get from a stiff racquet.

We are certainly not big fans of these racquets that provide excellent power.

We like to generate our own but we have to say, this racquet did allow us to hit spin shots freely which was something that we highly appreciated.

When buying a racquet, keep in mind that one aspect of it is going to be better than the other. So, with volleys, this racquet lacks a lot.

If you like to play a lot of doubles or finish points off by coming to the net then we won’t recommend this racquet for you.

But if things get even a little complicated and your racquet is caught off guard when hitting a difficult volley, the racquet will not go well with you.

With this racquet, we didn’t feel any volleys throughout the game.

It is not that impossible and once you continue playing, you will eventually get the hang of it but this level of performance is more expected from all-around tennis.

As far as the serves are concerned, the Burn 100S Tennis Racquet performed much better than it did with the volleys. You can easily hit serve consistently.

The serves go really well and you will generate really good power along with having complete control over your spins.

However, with so much stiffness, we did feel something missing during the second serve. It gets complicated there which gives the upper hand to the opponent and takes my confidence away.

Do you want to know what Wilson Burn 100S truly is made for? It is manufactured so you can hit groundstrokes for constant long hours.

If you happen to be someone who plays tennis all day long, making groundstrokes then you absolutely need to go for it.

However, you will realize its minor flaws when you’re in a face-off. The thing that bugged us was when we felt a lack of feedback during the serve and volleys.

If you happen to be a professional baseline player but are weak at serving and volleys then you wouldn’t wanna go for this racquet because it will push you further down the drain.

But if you’re already good at volleys and serve but lack a little in groundstrokes then it would be a very wise product to invest in.